After a year’s break, Linda Cockburn once again takes up the story of her family’s self-reliant lifestyle in Tasmania. The roof is just about to go on the sustainable house, the food garden is expanding – and so are the numbers of marauding wildlife

We’re a family that’s so fanatical about reducing our footprint that in 2005 we made a pact with ourselves to go six months without spending a dollar on food, power, water or transport – and to create as little waste as possible. We made it to around 95 per cent reduction on the australian average. that was in Queensland and from a suburban block.

We made the temperate leap to tasmania in early 2006 and have some new quests to add to the old. We’re back to our own goat’s milk and cheese, we’ve added on bees and sheep, and the garden is ever- expanding as I try to push our climate beyond the limits on our 3.2 acre (1.3 hectare) block – by growing avocados and cool-climate bananas, while enjoying all the pleasures of temperate stone fruit and raspberries.

This time we decided we wanted to live in a house with low ongoing energy use, utilising low-embodied energy materials – so we went with straw bales, but added a few extra rules: no concrete, no PVC and no chemical paints or finishes. It’s a grand dream indeed... and we’re about to put a roof on it.

Along with the edible population explosion in my garden there’s been a threefold increase in its sprawl, with approximately 3⁄4 of an acre (1⁄3 hectare) of land now taken up by fruit and vegies. the plants usually arrive in pots or seed packets, but also by the process Jerry coleby-Williams spoke of in the last issue – volunteers. I love ’em!

A number of plants are allowed to complete their life cycle and set seed. I select the strongest, sweetest and the slowest to bolt (whichever characteristic I most want to encourage) and let them tower over me in spires of seed-heads, or trail annoyingly over the footpaths as they set seed.

I save what I can in jars and packets to give to friends and neighbours, but there’s always a population of escapees, resulting in lots of little wild coriander seedlings or broccoli babies. these can be easily transplanted to somewhere more convenient. certainly, without the volunteers, I'd have a lot less carrots, parsley, tomatoes, rainbow chard, celery and lettuce.

A neighbour who saw me shaking a headful of lettuce seed across my unruly garden described me as looking like a shaman. but there’s nothing magical about my creation of productive chaos. A part of me would love to have neat rows of well-weeded orderliness, but maintaining that kind of garden is laboriously hard work, fighting the vacuum that nature so abhors. Maybe if I didn’t keep extending the area it would be possible. I do attempt to reduce my workload by applying heavy mulches to reduce the time spent weeding and watering. I’ve seen gardeners burn themselves out trying to achieve production and perfection. As long as I get to the weeds before they volunteer their offspring and out-compete my crops, I’m content.

I’ve acquired a cool-climate banana, ‘red dwarf dacca’, which only grows to 2m and now graces the greenhouse.

It may be the only way we get to eat them, as buying locally-grown is no longer an option. trev, however, scoffs at the concept of a cool-climate banana and says he’ll believe it when he sees it.

Five sugar maples were my christmas present of choice and I cannot walk past them without quoting Elton Trueblood: "A man has made at least a start on discovering the meaning of human life when he plants shade trees under which he knows full well he will never sit”.

Which, no doubt, applies to women too. The maples are slow growers. I might live long enough to – just once – tap maple sugar from them, but i hope someone else has the joy of doing so for many years after that.

I love buying heirloom vegetable and herb seeds – it’s almost an addiction. I check to see they are suited to the area, are hardy, disease-resistant and so on – but I admit to a tendency to go for those with interesting names. I’ve been having a ball asking friends, “Would you like to take home a ‘drunken Woman’ (lettuce, that is...)?” and I can’t wait to see my ‘taxi’ and ‘green Zebra’ tomatoes fruit.

I’ve also been indulging in bright purple broccoli and ‘chiogga’ beetroot – which, when sliced, looks like a target board with its circular patterns.

We’ve had a wonderful series of fruit harvests, starting with 10-12kg of gooseberries and raspberries, with smaller numbers of cherries, plums and strawberries. Now the apricots and peaches are nearly ready. The apples, pears and grapes have yet to be savoured and are eagerly awaited.

Surplus fruit and vegetables is shared with friends, or pitched over the fence to the three goats and two sheep, who congregate beside it in eager anticipation of each high-flying feast.

The recent acquisition of our first purebred goat has been a horrible mistake. Charity is an Anglo Nubian with zero agility (I’ve seen her fall on her own head while virtually just standing still). She’s an adequate milker, but it’s her mouth that’s the problem. From 5am, both we and the neighbours get to hear her holler for her morning feed – and then again in the afternoon. Pushed to our limits, we roar back, “shut up!”.

Bee-lieve it or not

I didn’t count them, but over several weeks 80,000 or so of our bees died. We watched them weakly walking around or trying to remove some invisible irritant from their bodies. I observed them in the garden stumbling over flower heads, drooping with exhaustion. We watched them pile up in front of the hive in the hundreds, then thousands... dead.

Finally it was down to a few hundred or so surviving bees and the queen. But her reign was nearly over. There was a descent of healthy robber bees, and the few hundred remaining bees died trying to protect the hive from invasion. I saw the queen one more time clambering about on her own, without her retinue of devoted followers. Then she, too,
was just another corpse.

The reason? Pesticides, somewhere within the surrounding 3km. Or else, someone has had enough of the summer invasion of european wasps and has doused them in the kind of poison bees and wasps take back to their hives and which kills them all. alternatively, someone has sprayed their crops with the chemical carbaryl or similar. bee populations are falling dramatically worldwide, but it’s a shock to have them die on my doorstep.

It’s also very sad. I’ve said it before: you can’t throw a hive of bees a ball; you can’t cuddle them and they don’t have big soppy eyes. but they are a productive entity in their own right, and their demise was both a blow and an indictment of our increasingly poison-filled world.

The wax and honey left in the hive was pulled out and discarded due to pesticide residue which would have killed any future bees; I boiled and scraped the frames until all the wax had been removed... then I ordered a new queen. She arrived with four or five worker bees in a queen cage – a wooden one with a candy plug that the bees eat their way out of. By the time they have done so, the couple of frames of new bees and the accompanying workers I’ve been given by a local beekeeper will have become accustomed to her smell and will accept her as their own.

So, no honey this year; it will be a battle enough for the new hive to establish itself without me robbing it. Very disappointing, and the question now is: “What if someone sprays, baits or poisons again, and my bees happen to have their working party in that area of the woods that day?”

There’s a blue-tongue in the garden eating our strawberries! Normally he’s resident in the hothouse, where he has his corner of mulch into which he likes to burrow – and apart from flinching when anyone comes in, he tends not to move around a great deal. But one day he (we call him Pointy, as opposed to his predecessor, stumpy) wasn’t there. Not thinking too much of it, I rounded the corner and there he was, munching down on my strawberries.

We’d been given some bananas and they were past their use-by date, so I offered one to Pointy and suggested it was a better alternative to my strawberries. He ate the banana, but he’s still a regular visitor to the strawberry patch. I’m just going to have to learn to be quicker!

The house will have a roof by the time this article is printed, and we’ll be working on locating walls. Because of the drought, straw bales are like hens’ teeth this year. We purchased 440 bales some time back, but they were converted into mulch long ago. Self-building, mortgage-free, is a challenge – but in these financial times, it is infinitely safer. Our household overheads are very low – as is our income – and, we both agree, without the garden feeding us, we’d simply never be able to afford to build. 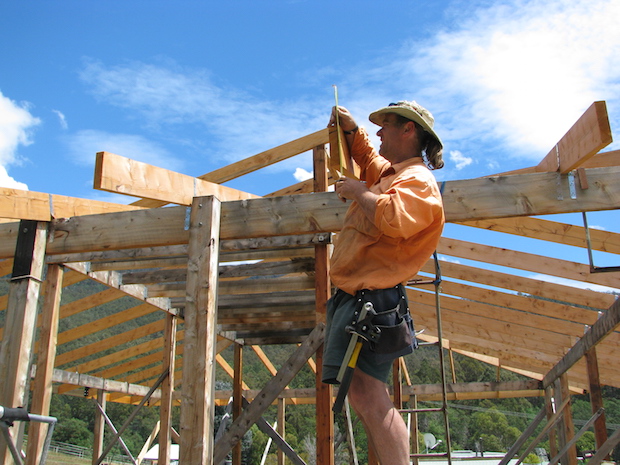