Despite their fearsome reputations, wasps, with a few exceptions, are pollinators and can help keep pests away. Denis Crawford takes a closer look at some of the goodies.

The word ‘wasp’ often conjures up an image of an invasive pest species such as the European Wasp (Vespula germanica), or one of the other aggressive wasps that visit gardens, which are feared for their stings (from the female).

A visiting wasp may in fact be a pollinator, a beneficial predator or parasite of pest insects, and have no sting. Wasps, along with their cousins the ants, sawflies and bees, make up the insect order Hymenoptera. There are about 12,000 species of wasps that have been formally described so far in Australia. According to insect taxonomists this number may only represent 25 per cent of the total number. Wasps are often colloquially called ‘hornets’, but we don’t actually have hornets in Australia.

Wasps grow through a life cycle of complete metamorphosis (technically holometabolous). The usual cycle is egg, larva, pupa and adult. Metamorphosis means ‘great change’, which refers to the difference between the immature form (larva) and the adult form – they look nothing alike.

Most adult wasps need a feed of nectar, especially female wasps, which need the energy to lay fertile eggs. You can help them by having a chemical-free garden with indigenous plants that produce flowers at different times throughout the year, especially the warmer months.

Many people don’t like potter wasps and mud-dauber wasps building their nests on the walls of houses. Try to create an alternative for them away from the house if that bothers you. A north-facing structure with a substantial overhang will provide a warm, dry surface for them to build their nests.

Grass-carrying wasps can be encouraged by sinking an upright log in the ground, mimicking a tree trunk, and drilling some 8mm and 10mm holes in it to a depth of about 100mm.

Ground nesting wasps, such as digger wasps and sand wasps, need a patch of undisturbed bare ground preferably in full sun to dig their nests – perhaps you have room for such a patch in your garden?

Parasitic wasps help manage the populations of other insects, including pest insects. The most efficient of these are the tiny wasps that parasitise eggs. The most common are from the genus Trichogramma which, at less than 0.5mm long, are among the smallest insects known to science. Trichogramma wasps lay their eggs inside the eggs of moths, and complete most of their life cycle within those eggs, stopping the pest’s life cycle before a single plant-chewing caterpillar has hatched.

There are also a couple of tiny wasps that parasitise the eggs of pest bugs, such as green vegetable bug (Nezara viridula), spined citrus bug (Biprorulus bibax) and bronze orange bug (Musgraveia sulciventris).

A healthy chemical-free garden will also attract some larger wasps that are parasites of common garden pests. Here are some to watch out for: 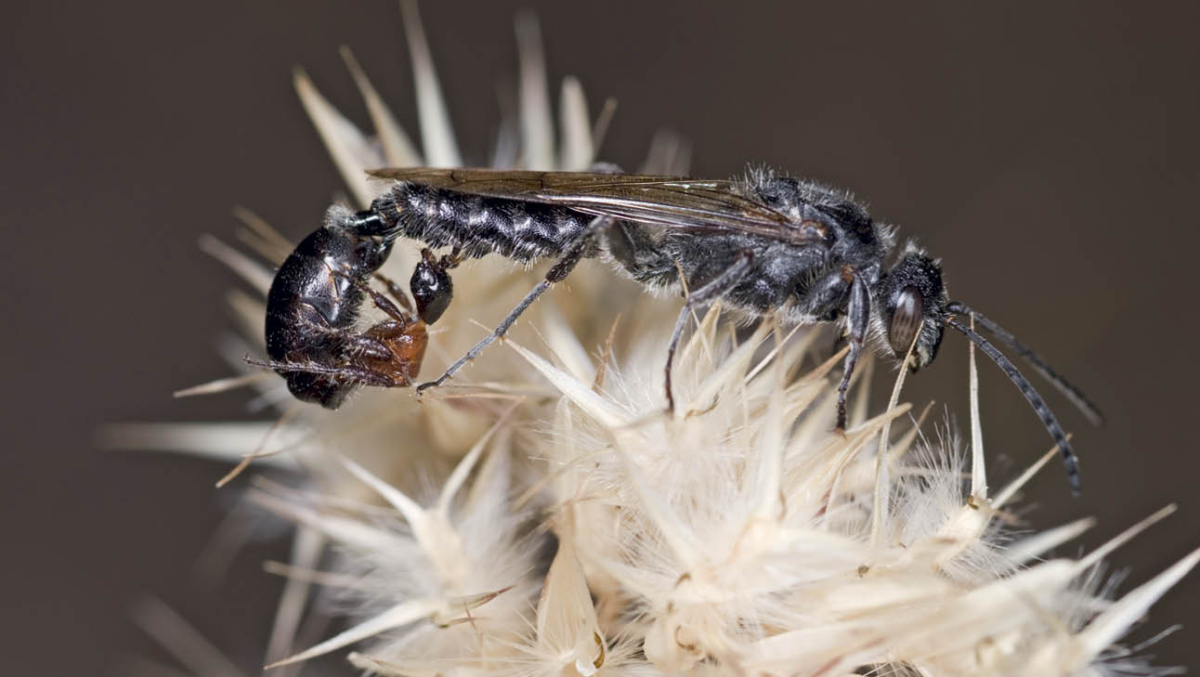 Above: The wingless female flower wasp is a parasite of beetle grubs.

Some parasitic wasps, such as Aphytis, can be bought commercially and introduced to the garden.