Don’t be daunted by bramble training and pruning – yes, they need management, but different techniques range from the most simple and quick, to more complex and time-consuming. When you understand how brambles fruit and grow, you can adapt techniques to suit. Cultivated brambles generally produce upright or trailing canes that in the first season don’t produce fruit. These are called primocanes. In the second season, these canes produce flowers and fruit from laterals (side shoots of main cane). They are called floricanes. After harvesting fruit, remove spent old floricanes

by cutting at the base and leave the fresh green new primocanes that have grown so the process can be repeated. Tie these new canes to your trellis or post to keep them off the ground so they don’t sucker and are easier to harvest from. Also, as I will explain, to make management and harvesting easier, keep your primocanes and floricanes separated as best you can.

Now for your support mechanism. Here are some options for training. The choice is yours.
Note: Each season you will cut out old canes and retrain new primocanes.

This involves using the post (and wire if more than one post).
• Single post, no wire (less vigorous cultivars). Use a single 15cm diameter vertical post at least 2m high. Train one bramble by winding canes loosely around the post, supporting with ties if necessary. Lop canes at top of post. Gather and loosely tie developing primocanes to one side until ready to replace old floricanes.

• Multiple posts (See A, below). Place several posts about 2m apart in a row. Join posts at top with wire. Train bramble around post as above, but when growth reaches the top, wind canes along wire instead of lopping them.

Wire trellis
• Single wire 1.5m (See B). Gather primocanes that will become floricanes into a bundle and wind loosely around the wire in one direction. Trim excess length. Later as new primocanes grow, roughly bundle in opposite direction.
• Double wire 1m and 1.8m (See c). As above, but train half the canes along the top wire, and half along bottom.
• Triple wire approximately 0.5m, 1m, 1.8m As above, but train along three wires.
• Double-wire weave As for double wire, but weave half the canes from the top to bottom wires, the second half in an alternating pattern.
• Three-wire fan at approx. 1m, 1.5m and 2m (See D). Fan out canes and tie individually to wires. Time consuming but productive.

For more on growing brambleberries, get a copy of the September Issue 103 Organic Gardener magazine OUT NOW! 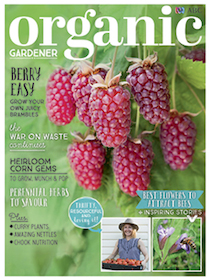