Liquid fertilisers have changed markedly in recent years, a nod to the fact that we now recognise we need to feed our plants and the soil microbiome.

The main claim to fame of these products is that they provide an immediate nutrient boost, which is vital for fast- growing and leafy green vegetables, and fruit trees that are being grown in containers or in the ground.

These fertilisers provide nutrients to your plants in an easily accessible form as well as stimulating microbial activity in the surrounding soil. They most often come in three forms: a ready-to-spray foliar feed that can be applied to leaves; a liquid concentrate that has to be diluted; or dried powder, which then needs to be dissolved in water. The latter two are then applied to leaves and the soil. Alternatively you can make your own from manure, compost or weeds (see p.84).

While providing a fast-acting nutrient boost, liquid fertilisers are not long lasting. Heavy rain can quickly leach them from the soil. That said, high levels of organic matter in the soil will help to hold the nutrients for longer, and adding composted biochar can also help with nutrient storage. Recent research by Colorado State University and Germany’s University of Tuebingen* has shown that composted biochar has a very thin organic coating that significantly enhances its ability to store nutrients and form further organic soil substances.

So what’s the best liquid fertiliser for your plot? To help you decide, here’s a run down on each.

Fish emulsions and other complete fertilisers

Complete organic liquid fertilisers are often derived wholly or mostly from fish and other marine life, and seaweed (usually kelp). Look for cold-processed or cold-fermented products. These will have the right balance of the major nutrients – nitrogen, phosphorous and potassium – and a good range of trace elements such as sulphur, iron, zinc, manganese, boron, magnesium, copper, silicon, calcium, molybdenum, selenium and cobalt. These days you will also find other things listed, such as protein-building amino acids, growth regulators like auxin, betaine, cytokinins and gibberellin, as well as humic and fulvic acids and even vitamins. Sometimes they will also contain microbes including beneficial bacteria and fungi. Fertilisers that are higher in potassium may say they are good for fruiting and flowering.

Seaweed extract, usually made from different kelps, not only contains an array of trace elements but is often quite high in potassium and iodine. Amino acids and the growth promoters are also present.

Seaweed extract is not a complete fertiliser – it’s quite low in nitrogen and phosphorous – but acts as a general tonic and trace element ‘snack’ for your plants while increasing root development and feeding the soil microbiome. Fungi in particular benefit from the long-chain carbohydrates found in seaweed.

Seaweed was used to fertilise crops in Roman times, and since then continuously in coastal regions all over the world. The first liquid seaweed was produced in the 1950s and in Australia from Tasmanian kelp in 1974.

Look for cold-processed or cold-fermented products. Seaweed extract also helps to reduce transplant stress,
can increase fruit production as well as tolerance to drought, heat, cold, and pests and diseases. It might also increase shelf life of fruit and vegetables after harvest.

AMINO ACIDS are found in seaweed and marine waste such as prawn and crab shells. Amino acids are protein-building blocks that are made by plants during photosynthesis.

But they are also absorbed by plants when applied in liquid form. There are about 20 amino acids involved in plant functions such as protein synthesis, pollination and fruit formation. They are also important for microbial flora in the soil. Overall, they can increase crop yield and quality as well as increasing resistance to unfavourable weather.

HUMIC ACIDS is found in humus, and in Australia it is generally derived from good-quality brown coal.
Usually sold in the form of potassium humate, which is water soluble, humic acids help to feed fungi. They are essential for healthy soil, and also help with root growth and the retention of minerals and water in the soil, and increase nutrient absorption by plants. Humic acids are often found in complete fertilisers but can also be purchased on their own.

LIQUID MICROBIAL TREATMENTS can be made up of numerous different species of bacteria, fungi, actinomycetes, protozoa and good nematodes. They are best applied in spring and autumn
in the early morning or on a cloudy day. These microbes are found in compost, and in some complete fertilisers but they can also be bought separately and brewed to add to your soil food web.

This sugar byproduct is a simple and useful liquid food for bacteria in the soil biome. Simply dissolve two tablespoons of molasses in a watering can full of water and then sprinkle this over the soil.

This can be purchased or home produced. It’s the liquid that has passed through a worm farm. The quality and content depends totally on what is fed to the worms and how well the worm farm is working. If it’s a healthy, well-functioning farm then it should be full of nutrients, humic acid and beneficial organisms from the worms’ digestion of the food matter. This will promote plant growth and yields as well as improving soil and the microbiome. Dilute the worm juice with about 10 times as much water before using and, because of the slim chance of pathogens being present, don’t spray on foods you may want to eat. It’s best watered onto the soil.

Homemade liquid manures and weed and compost teas work in the same way as commercial liquid fertilisers, and have much lower cost, but their disadvantage is that the nutrient content varies enormously depending on how much and which weeds, compost or manure you use.

You can use any non-carnivorous animal manure. As a general rule manures are not complete fertilisers, but are soil conditioners as well as providing low levels of major nutrients (nitrogen, phosphorus and potassium). Bat, chicken and rabbit (in that order) have much higher levels of these essential nutrients, while cow, horse, alpaca and sheep are quite low. Also the older the manure the lower the nitrogen content.

These are made by soaking weeds in water. By adding both nettles and comfrey it’s possible to make a well-balanced liquid fertiliser. Other weeds – dandelions (roots and leaves), mallow, chickweed, goosegrass, couch and milk thistles – can be included in a more general weed tea. Soak weeds in water over several weeks; add rotting vegetation to compost; dilute strained liquid with equal amount of fresh water; use.

For more, get your copy of Issue 99 Organic Gardener magazine, OUT NOW! 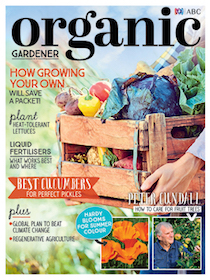