We are proud to announce that ABC Organic Gardener has won “Publication of the Year’ (for the Sept/Oct 2013 issue) and “Website of the Year” at the 2013-14 HMAA Laurel Awards.

The Horticultural Media Association Australia (HMAA) is a national media body. It represents the Horticultural Media Associations incorporated in Victoria, New South Wales, South Australia and Queensland. These organisations provide forums through which people (including gardening writers & photographers) actively involved in the presentation of horticulture and gardening to industry and the general public can meet together to discuss common interests and issues.

The HMAA Laurel Awards recognise writers, photographers, educators, researchers, and broadcasters who have demonstrated exceptional creativity in communicating the benefits and joys of gardening to the community.

Winners of the 2013-14 Laurels were announced at the Gala Dinner in Melbourne on Tuesday, March 25.

About 160 horticultural media personalities from throughout Australia attended the seventh Laurels gala event, held at the Plaza Ballroom in Collins St, Melbourne.

Judges commended the high quality and diversity of entries – a record 160 this year. They also commented on the number of entries for the newly introduced social media categories, a reflection of the way HMAA members are increasingly undertaking their work. 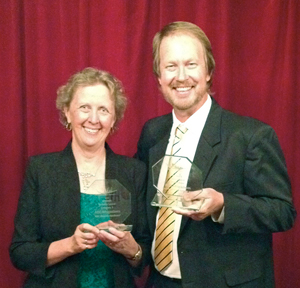 Congratulations to all the winners.

It’s wonderful that the hard work and enthusiasm of the team has been recognised, both for Organic Gardener magazine and organicgardener.com.au. We enjoy communicating our love of organic gardening to our readers so it’s a great bonus to be recognised in this way by the horticultural media industry as a whole. How to take a hardwood cutting

The language of growing