Penny Woodward loves frogs and has had a large frog pond in her garden for 10 years. The sad part is they are under threat – but we can help.

Frogs are one of the most threatened animal groups on earth. In Australia, they are the only remaining amphibians. Of our 246 species, nearly all are unique to our continent.

Dr Jodi Rowley from the Australian Museum says in an interview on ABC Radio National’s ‘Off Track’ that: “Frogs are incredibly threatened – one of the biggest challenges we are facing is trying to figure out how we don’t lose any more Australian frogs. We’ve already lost at least four species, many others are missing, feared extinct.”

Annually, each November, citizen scientists help to fill in the many gaps in our knowledge. Using the Frog ID app they contribute to this project by recording frog calls and sending them to the Australian Museum.

The many threats to frogs include the chytrid fungus, land clearing, and climate change (including bush fires). Frogs are an important indicator of the health of our environment. Their permeable skin, and their need to live in both water and land, mean they are more susceptible to environmental change than many other animal groups.

A clear indication of the decline of our ecosystems is that frog numbers are plummeting at an alarming rate – an estimated 40 per cent of frog species worldwide are threatened with extinction.

So how can we help frogs? As well as reversing climate change and land clearing, reducing pollution and preventing lakes and waterways from being drained or contaminated by chemical run-off, we can also help by making our gardens frog friendly.

Not all frogs are attracted to a garden environment, there are some that live in deserts, spending months or years underground, another lives in termite mounds and feeds only on termites, but many can be helped by our efforts as gardeners.

Any container that holds water will attract frogs. Shallow dishes, deep terracotta pots, old baths, and shell-shaped toddlers pools can all be used. Dig them fully or partially into the ground and include some plants and rocks and logs. If you have the space and time, try creating a frog pond with deeper and boggy areas. Different habitats benefit different frogs. Ground frogs like dense foliage to live in and open water for tadpoles, but tree frogs like, well, trees to climb. Combine these so you have multiple habitats. Below are some of the things to keep in mind.

Frogs don’t like too much sun, so whatever your style of pond, choose a spot with morning sun and shade in the hot afternoon. It depends a bit on your climate, but roughly frogs need 70 per cent shade and 30 per cent sun. If you live in hot dry or tropical regions, they need more shade. In cooler temperate regions, less shade. As well as shade provided by trees, smaller patches of shade are supplied by shrubs and reeds. Finally, as frogs are often noisy, don’t put your frog pond close to your neighbour’s living spaces (unless they enjoy the nighttime chorus).

Both tadpoles and frogs need places to hide. The more diverse your planting in and around the pond the better. Rocks in the water and around the edges, as well as logs and smaller pieces of wood, are also important. At least one piece of terracotta pipe submerged in the water will give tadpoles a spot to hide from wading birds. The nooks and crevices created for frogs and tadpoles provide spots for water beetles and more to breed, providing food for frogs. Female frogs mainly lay eggs (or spawn) in water or marshy ground (see picture below). 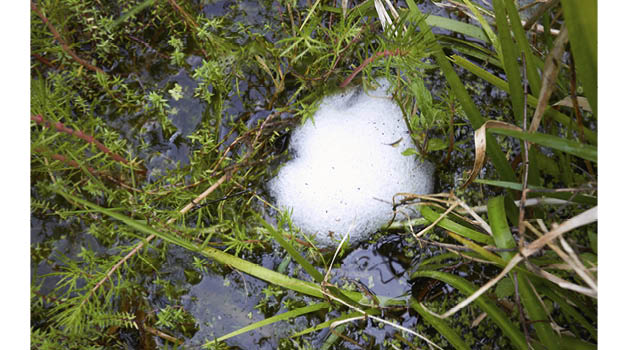 The best plants for frogs are local indigenous plants, but it’s also fine to use other non-poisonous and non-invasive plants both in pots that can be submerged in the water, or planted straight into boggy areas around the pond and in the garden near the pond. What you plant will depend on your climate. My frog pond doubles as a pond for growing water-
loving food plants and herbs. I grow watercress, Vietnamese mint and water celery in the water (thinning regularly to keep them under control) and water chestnuts, meadowsweet and sweet flag in boggy areas, and lemongrass and chamomile around the edges, as well as local indigenous water plants. Don’t use quickly spreading floating plants as they’ll block light and reduce oxygen in the water, potentially killing tadpoles.

If you want to help by building a frog pond in your backyard, there's more detailed information in our December 200/January 2021 issue (#122) – purchase a copy today and have it delivered!