There is a theme running through the work done by Declan McGill and Melissa Charlick at Roly Poly Farm: giving back – to their community and to the property that is now their livelihood.

Declan and Meilssa's 12-acre farm is situated on unceded Pinjarup land (in Harvey, WA), a 1.5 hour drive from the city of Perth. It used to be a biodynamic market garden and before that, a dairy farm. Now it is Roly Poly Farm, which provides fresh produce to locals through a CSA (Community Supported Agriculture) membership, where the consumer buys direct from the farmer through a share scheme. A fee is prepaid to the farmer directly, who then provides a regular delivery of freshly grown, seasonal veg and fruit.

They currently have 12 local members in their CSA scheme, while the other 120 are up in the city. The property at Harvey, which they took on about a year ago, gives them a way to supply their “farm to plate” produce to more people, with its rich river-bed clay-loam and supply of water from the Harvey Dam.

And so it is that on a weekly basis they set-up with their harvested vegies at established pick-up locations, where members pack their own share of vegetables. It’s similar to being at a market but it’s already paid for with their membership, and there’s a chance for Mel and Declan to connect with the people who will be taking their vegies home to cook a meal that night.

You can read more of Roly Poly Farm's story in our Early Spring issue (#119), available now. 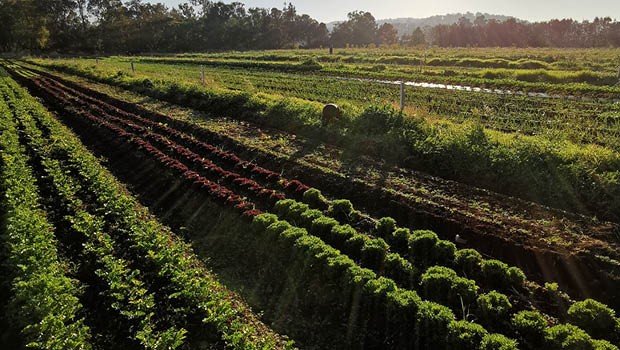 Community-supported agriculture (CSA) is a model of food production and distribution that directly connects farmers and eaters – people buy shares in a farm’s projected harvest in advance and for a set period (a season, or a year, for example) and receive regular deliveries.

CSA started in the 1970s in Japan by organic vegetable farmers and is now widespread and growing around the world. It is based on the Principles of Teikei (1978):

Australia has a growing CSA movement as small-scale farmers move to this solidarity economy for financial security, risk sharing, and deeper connection with the people who eat their produce.

For more about regenerative agriculture visit:

On regenerative farming and agriculture