Is it the name or scent that attracts us, or the colour or cultivar? Ask any rose lover and they’re likely to say all four and more. I find it’s often the name and the fascinating history that first draws me in.

Over 150 different Rosa species exist, with most growing wild in their countries of origin, from northern parts of Asia including China, to Siberia and other parts of Central Asia and as far south as India. Some species are also native to Europe, North Africa and North America. The earliest rose fossils date to the Eocene Epoch (from 56 to about 33.9 million years ago). These were found in northern China (which is also home to the most species) and surprisingly Alaska.

Not all of these species have found their way into cultivation but enough have to form the breeding stock and basis for more than 3000 varieties and cultivars available today, with new ones being released all the time. The new releases just about replace the older cultivars that haven’t gained acceptance or have been lost over time. There have probably been as many as 30,000 different named roses produced over time.

Roses fall loosely into types determined by their growth habit: ground cover or carpet, miniature, climbers and ramblers, shrubs and standards. They are also categorised by the types of flowers and how they flower, and their breeding, for example Floribundas (also known as cluster flowers), Hybrid Tea (large flowered), Damasks, Gallicas, Noisettes, Bourbons and Hybrid Perpetuals.

The most sensible way to make a decision about what rose to plant, is to look at what suits you and your garden. How much room do you have, do you have pergolas, verandahs or even old trees that you could grow ramblers or climbers up and over. If you’ve only got a small pot or narrow bed, then a carpet or miniature would be best. If you want to create a hedge, then a Floribunda could be a good choice. The least sensible is to just buy a rose because you love the name, colour or scent, and only think about where you are going to put it once you get home! Although you can be forgiven if you do.

With so many roses to choose from it’s almost impossible to pick favourites, but I have a fondness for single-flowered cultivars and species roses.

This is one of the species roses. It has five white petals, bright yellow stamens and a beautiful strong scent. Introduced to Australia before 1911, it has glossy dark green foliage and can grow into a very large rambling bush. It is native to sub-tropical regions of China and Vietnam.

Single-flowered cultivar Mermaid is a climbing rose that reaches up to 8m rambling over walls, pergolas or trees. The large, pale-yellow petals beautifully set off the thicket of amber stamens. While the fragrance is mild, the almost continuous flowering right through the season is ample compensation. Dortmund is another single-flowered climbing rose, but this time with beautiful red flowers.

Really old-fashioned roses are those such as Quatre Saisons, which dates from early 1720 and is one of the very first Damask roses. These tall, disorderly shrubs flower in flushes throughout the season with deep pink, double-cluster blooms that have a lovely fragrance.

Peace is an interesting rose that, like so many others, has a muddled history. A Hybrid Tea rose, originally called Mme. A Meilland, was bred in France in 1935 but was renamed Peace to commemorate the end of World War II in 1945, and introduced to Australia under that name in 1947. It has very large, full, sweetly scented blooms with yellow petals and pink edges.

This was bred in Australia in 1924 and is one of 122 roses bred by Alister Clark from 1912–1949. Many of these have been lost to cultivation but 67 survive and can be seen in the Alister Clark Memorial Rose Garden in Bulla, Victoria. Lorraine Lee is a Hybrid Tea rose with beautiful pink flowers from spring to winter, and often all year round in warmer climes.

Austin is a very well known English rose breeder who since 1961 has bred over 190 different roses with an emphasis on the character and fragrance of old roses, but with more robust plants and repeat flowering. The velvety crimson William Shakespeare and rich pink Mary Rose are beautifully fragrant examples of his rose breeding.

For more on old-fashioned roses and how best to grow and nurture them, grab the latest copy of Organic Gardener Issue 102 OUT NOW! 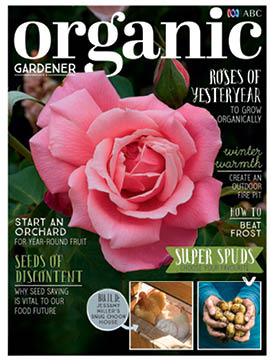 Garlic in your garden

Birds in your garden