Just as humans have migrated across oceans to permanently inhabit every continent on earth except Antarctica, so have food plants. Most cultures eat a combination of native and exotic plants. Sometimes these exotics are from a neighbouring bioregion, but more often than not, they originated in distant lands and made their way to the plate via a complicated journey over many generations.

Eggplant (Solanum melongena), sometimes known as aubergine or brinjal, is a classic case in point. It’s a food synonymous with Greek cuisine, and the Mediterranean in general, but the plant originated thousands of kilometres away in one of the world’s botanical hotspots – eastern India/southwestern China. The earliest written mention of eggplants being cultivated for food was in a 544AD Chinese agricultural treatise. Historians believe that Arab traders working the Silk Route transported the plant to the west, and from the Mediterranean region the Spanish Conquistadors took it to the New World. Eggplants are now one of the most cosmopolitan members of the nightshade (Solanaceae) family of plants.

Despite their ubiquity, they remain the obscure cousins to three more popular members of the Solanaceae family – tomatoes, capsicums and chillies. This is a shame, because eggplant is a worthy food to grow in its own right. It suits a wider range of growing conditions than tomatoes, being equally at home in the wet tropics (such as southeast Asia and northern Australia) and drier, arid regions (such as North Africa and central Australia). It’s less prone to disease, tends to bear heavier crops, and in warm areas, can be successfully grown as a short-lived perennial. Perhaps the only thing holding eggplant back is the widespread knowledge of how to use it in the kitchen and savour it on the plate.

For more on eggplants, including how to grow and nurture them, get your copy of Issue 97 Organic Gardener magazine OUT NOW. 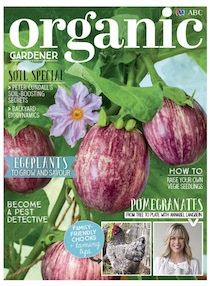 Bush foods - good for you and the environment

The power of pollination