Blue – truly blue flowers, rather than mauve-blue or with pink tints – hold a unique appeal, as evidenced by the decades long, but thus far futile, quest for the blue rose.  Nevertheless, although blue flowers are relatively rare, they are well worth searching out. They perfectly complement all pastel shades of pink and white, and they also look especially good against a backdrop of silvery grey foliage, such as that of wormwood, lavender or Helichrysum petiolare. Only in deep shade do the flowers get a little lost amongst the shadows.

Taking up the blue challenge

My first humbling experience with a true blue flower was more than three decades ago, when I saw the famous – or as I now know, infamous – Himalayan Blue Poppy (Meconopsis betonicifolia) featured in a UK gardening magazine. The sky-blue, almost translucent petals captivated me and, to my joy, a rare perennials nursery in Victoria stocked the eye-wateringly expensive crowns. It didn’t really occur to me that a plant from the alpine mountains of the Northern Hemisphere might not be entirely happy in dry, dappled shade under a thirsty gum tree with 40-degree summer temperatures: the tiny sprig of green that hesitantly emerged in spring quickly vanished, never to return. Undeterred, I ordered again the following winter with the same scorched-earth result.

Experienced Australian gardeners more skilled than me have succeeded with this poppy, and I might have more luck if I tried now; if you have a little gardening know-how and live in a cool or alpine area, or southern Tassie, you’re in with a chance! Gentians are a similar challenge.

For easier blues, try annual cornflowers and lobelia, or some of the stunning salvias such as S. patens and its cultivars or Salvia ‘African Skies’, delphiniums, sea holly (Eryngium species) cultivars, , Lobelia siphilitica and Lithospermum cultivars. All are available from cottage garden, perennial and mail order nurseries.

The predominant colours of the flowering Aussie bush tend to be purple and yellow, with red and white accents, but we do have several spectacular blue-flowering native plants such as the electric hued Lechenaultia biloba, for well-drained, acidic, sandy soils in full sun, as well as several Hovea and Dampiera species.

Our vegetable gardens have white- or yellow-flowering brassicas, and yellow, white and purple flowering tomatoes, capsicums and potatoes, but blues are rare. Borage is not only sky blue, but attracts bees, and the flowers are edible with a mild cucumber flavour – toss them into salads or punch. And I plant chicory (picture below) more for its lovely flowers, than for its roots or chicons! 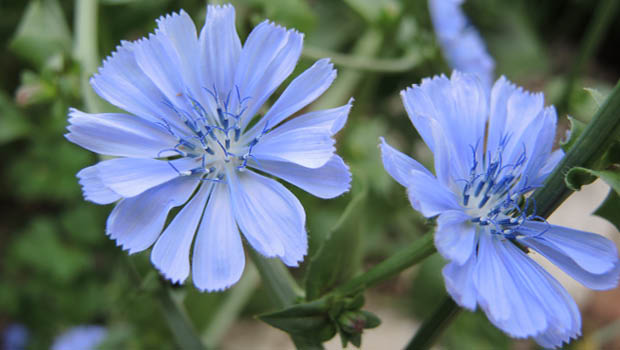 Blue flowers really do make a difference to a garden – it’s only after you’ve added them that you realise what has been missing. Which makes me think: those Himalayan Poppies are now cheaper than they were when I tried them 30 years ago: perhaps I should give them another crack!

Looking for different types of ornamentals for your garden? Here's some more you may want to try:

Finding fungi in the wild