Pollination is necessary for our gardens to thrive so it's handy to understand how we can help all those beneficial insects and animals do their work.

Years ago, on one of those breezy but short-lived Australian chat shows, I saw a fascinating interview with Sea Shepherd founder Paul Watson. For such a light show, the chat turned unexpectedly serious, and Watson started describing the total dependence of humans on a living world we mostly take for granted. The long-time conservationist said something that still resonates with me today: “Honey bees don’t need us, but we sure as heck need honey bees.”

Such is the power of pollination. The process of transferring pollen from the male part of a flower (a stamen) to the female part (a pistil), is nothing less than a foundation of our civilisation, yet we’re still only gradually appreciating its importance – and how many different species and factors play a part.

According to a 2018 report by ABC Fact Check,[1] around 35 per cent of crops grown in Australia for food production are reliant on honey bees for pollination, while as many as 75 per cent of crops benefit from pollination by bees along with other pollinator species such as birds, bats, wasps, butterflies, moths, flies and beetles (read more on the diversity of pollinators on p.50), as well as the wind.

A world without pollinators is a world where many more people go hungry. And that’s just food. Imagine the loss of biodiversity that would occur if we were to see an annihilation of pollinators. It would be catastrophic.

The other thing we’re starting to understand about pollination is just how complex, even wondrous, the actual process can be. It’s not simply a case of bees flitting merrily from flower to flower on a cheery spring day. A recent episode of David Attenborough’s nature doco, Our Planet, showed a close-up scene of orchid pollination that elicited lots of wows from my family as we watched.

The species of orchid featured produces flowers that are shaped like buckets, filled with an oily liquid. The male orchid bee needs a rich perfume with which to attract females, so it lands on the surface of the flower in an attempt to coat itself with a pheromone. Unable to get a decent grip on the oily surface of the flower, it slides into the liquid-filled bucket and scrambles to get free. But the orchid has a trick up its sleeve. The only way the bee can escape is to crawl through a narrow tunnel at the rear of the flower. As it squeezes through the exit, coated in the sticky liquid, two pollen sacks are glued to the bee’s back before it flits off to find another flower. The orchid has its pollen transferred to a nearby plant, and the bee is rewarded with a powerfully seductive perfume.

Another complex marvel of pollination is Indonesia’s titan arum (Amorphophallus titanum). Known alternatively as the corpse flower, this gigantic member of the lily family produces just a flower or two per decade, a phenomenon so rare that pollination has to be ensured for the survival of the species. To attract pollinators the flower is huge, up to three metres tall, and it smells absolutely rank. The odour is variously described as Limburger cheese, sweaty socks, faeces or rotting flesh. You and I might find this off-putting but blowflies and carrion beetles find the scent completely irresistible. They perform the function of transferring pollen from one flower to another.

This kind of symbiotic evolutionary dance shows how sophisticated the process of pollination has become over millennia and how vital it is to maintain a diversity of life on the planet. In an era of “insect Armageddon” and mass extinction, where issues such as pesticides and habitat loss are sending species to the brink, sometimes before they’ve even been discovered, we must prioritise the conservation of pollinators in all their forms.

Begin by understanding that monocultures are less than ideal for pollinators. A field of flowering canola may look like a honey bee’s paradise, but it’s not. When a single crop is grown across a vast swathe of land it can cause a range of problems for pollinators, including nutrient deficiencies and short bloom periods.

For these reasons and more, pollinators tend to do better in diversely planted urban and suburban areas than they do in farming country. To help them along consider the following:

• Biodiversity: Many garden designers like to use a limited plant “palette”, and gardens focussing on foliage over flowers are all the rage. If you care about pollination, however, you’d be wise to buck such trends. Throw caution to the wind and use the most colourful, eccentric palette imaginable. Plant a mix of trees, shrubs, perennials and annuals. Include species that provide shelter and nesting sites as well as food, introduce water into the garden, and pollinators will take up residence. Aim to have something in flower all year round.

• Avoid chemicals: Build it and they will come, scrap the chemicals and they will stay. It goes without saying that as organic gardeners, we ought to avoid synthetic pesticides at all costs. But we shouldn’t overlook the harm certified organic pesticides can do. Natural pyrethrum will kill some pollinating insects as effectively as a neonicotinoid. Use organic pesticides judiciously, always as a last resort after nature has had time to resolve any pest problems without intervention.

• Hives and sites: Offer support for specific pollinators by providing hives and other breeding sites. Stingless native bees are brilliant little pollinators in warm-temperate to tropical climates and their hives are assets to even the smallest garden. You might consider keeping honey bees, which thrive in diverse gardens. An insect hotel will provide nesting sites for wasps, solitary bees and other helpful insects while boxes for microbats, lorikeets and sugar gliders will help some of the lesser-known pollinators feel at home.

• Conserve wild areas: The other thing we need to support is conservation of wild areas, particularly national parks, but also natural corridors and unprotected bush remnants. Australia is a classic case of death by a thousand cuts when it comes to clearing of native forests but we’ve also lost thousands of wetlands, heathlands and grasslands to bulldozers and chainsaws. Habitat loss is a major reason why pollinators are under pressure. Perhaps you can join a local nature group or national conservation organisation. Some even buy back land to manage and protect.

One of the most common problems encountered by food growers is a plant that flowers, but goes on to produce no fruit. The primary cause of this is a lack of pollination, and it can occur for a number of different reasons. Low pollinator numbers, inclement weather, mistimed flowering because of drought, a lack of compatible pollinating partners, lack of wind, and pests and diseases can all reduce or obliterate a crop. Generally, I’m happy to let mother nature take her course and can accept a few losses, but there are times when it’s worth a gardener’s while to intervene.

First, you should ensure that plants requiring cross pollination have a partner nearby. Most apples need a partner or two, for example, as do many other fruit-bearing plants. When purchasing fruit trees ask the nursery about their pollination requirements. If pollination isn’t happening for other reasons, you can hand pollinate. In essence, this means the gardener performs the role of pollinator, manually transferring pollen from one flower (or part of a flower) to another.

This is easy with some flowers. Pumpkins, for example, are a doddle. The male and female flowers are easy to identify (males sit proud above the foliage, females are shorter and have a tiny, unfertilised fruitlet attached to the base). Simply break off the male stamen and use it to brush pollen onto the female pistil.

Passionfruit flowers are equally simple. They contain both male (lower anthers with pollen sacks) and female  parts (pistils that sit higher than the anthers), so pollination is as easy as collecting pollen from anthers with a soft artists brush then dabbing it on the pistils. Or in the case of no wind, it might just mean shaking the plants, as is needed when growing tomatoes in greenhouses.

We have many other articles that look at how we can help stave off climate change, you can find more information about our latest issue at Organic Gardener Magazine Australia. 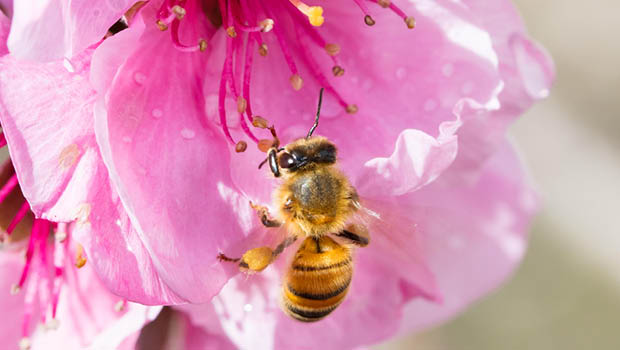 This article was first published in Issue 111 (Early Spring 2019) but it's definitely worth reading again with ideas to keep bees and other pollinators happy in your garden.