Simon Webster investigates what it means to go ‘off-grid’, and what’s feasible.

Off-grid living. What image does that conjure up? A tumbledown shack tucked away out in the bush? What about a terrace in the middle of Sydney?

Many readers will be familiar with sustainability pioneer Michael Mobbs, whose house in inner-city Chippendale is disconnected from the electricity grid, the mains water supply and the sewer. He produces all his own electricity, drinks rainwater, and recycles all the home’s grey and black wastewater on site.*

It hasn’t been easy. Mobbs, a former environmental lawyer, says his legal training has helped him wade through all the red tape he’s faced since he began renovations in 1996. But he believes it’s been a battle worth fighting. For Mobbs, going off-grid is not just a way of reducing his environmental footprint, but a protest that can inspire wider change.

“By disconnecting from energy, water and sewage systems we can make a real difference to our personal pollution of the earth, air and water,” he says, “and speed up the rate of change for governments and business, which seem to think they’re going to be here in a couple of hundred years and are behaving accordingly.”

But where to begin? You don’t have to go the whole hog straightaway – or at all.

“I tell people to start where they’re most comfortable,” Mobbs says. “That might be getting an energy-efficient fridge. If they’re concerned about their garden, get a greywater system. If they’re very concerned about the future of the planet, they may wish to forego buying a new car and spend that money on going
off-grid instead.”

There are three main areas to consider if planning to go off-grid in your home: power, water and wastewater.

When it comes to energy, going off-grid is easy, but initially costly. Simply install solar panels and batteries and tell your electricity provider you want to disconnect.

Mobbs has a 3.5kW system plus batteries. His electricity bills are zero, though he does pay about $300 a year for mains gas, to which he is still connected for cooking, as his roof is too small to produce enough electricity for that.

Of course, you don’t have to go off-grid when you install solar panels. Most homes with solar panels stay connected to the grid. They export their excess power to the grid, and access grid power when they need it.

Damien Moyse, policy and research manager with sustainable technology organisation Renew, says there’s a lot to be said for a grid-connected system. It’s cheaper to buy and maintain than an off-grid system and can potentially be better for the environment, too.

“In summer your system will generate way much more energy than you need,” Moyse says. “If you’re connected to the grid, that excess energy can be used by your neighbours, displacing fossil fuel creation.”

Set-up costs for power: About $24,000 for panels and batteries for a household of four, Mobbs says.

Going off mains water is easy, too, says Mobbs, who estimates that because of his house alone, Sydney’s main dam contains an extra 100,000 litres of water each year. Rainwater is collected from the roof and goes into an 8500-litre concrete tank beneath the back deck. A first-flush diverter, a sump and self-cleaning gutters keep the water clean. A simpler option is to stay connected to mains water for drinking, and install a rainwater tank for the garden, toilets and/or laundry.

Mobbs also keeps 100,000 litres of sewage out of the ocean every year, thanks to an under-house recycling system that manages greywater and blackwater, allowing it to be re-used for toilet flushing, laundry and garden.

If you want to manage your own blackwater (from the toilet), this is going to be the hardest aspect of off-grid living to get approved by your local council. Installing a greywater system for the garden is an easier and cheaper option.

Set-up costs for wastewater: From $11,000 for a water recycling unit.

The traditional definition of going off-grid is disconnecting from mains power, but increasingly the term is taking on a wider meaning that encompasses being more independent, empowered and resilient, in whatever ways you can.

This may involve taking charge of your water and wastewater, travelling on foot or by bicycle whenever possible, or growing and preserving as much as your own food as you can.

How you buy and consume food can also get you ‘off-grid’. The more you buy from ethical sources such as farmers’ markets and food co-ops, the less dependent on the ‘grid’ of industrialised food production you’ll be.

• Michael Mobbs recently announced he is moving to the country to prepare for a troubling climate emergency future. Learn more about his house and going off-grid. 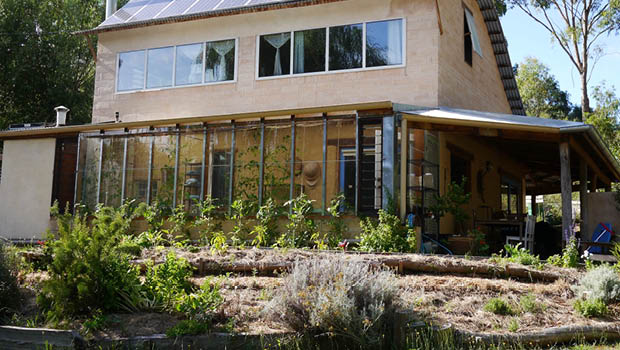 You can get our latest issue and learn more about helping the planet. Visit Organic Gardener Magazine Australia.