Truly the best native fruiting plants of arid areas of Victoria, SA and NSW, the quandong, or Native Peach, Santalum acuminatum, is rarely seen today. A small, slightly weeping tree, with narrow grey-green leaves, they are parasitic plants, so are not simple plants to grow.

Germination of the seeds is tricky enough, involving cracking the large woody wrinkled-looking seeds before planting them. Then the young seedlings need to be introduced to a host plant, for them to attach their roots too and thus receive nourishment.  Sometimes native tussock grasses or Poas are used for this, also Myoporum parviflorum – the idea is to give them a transition plant in the nursery and then they will attach to another host in the ground. I prefer the idea of planting seedlings straight into the ground near a potential host plant.

In summer, trees produce tiny fragrant creamy white flowers, which are visited by a range of insects including European honeybees. Hopefully, some of these flowers are pollinated and turn into tiny green fruits in autumn, which develop into round, glossy red fruits in spring. The fruits have a good amount of sweet and tart flesh around a large seed, and are good eaten raw off the tree, or with the seed removed, can be cooked into pies or jams, or dehydrated. 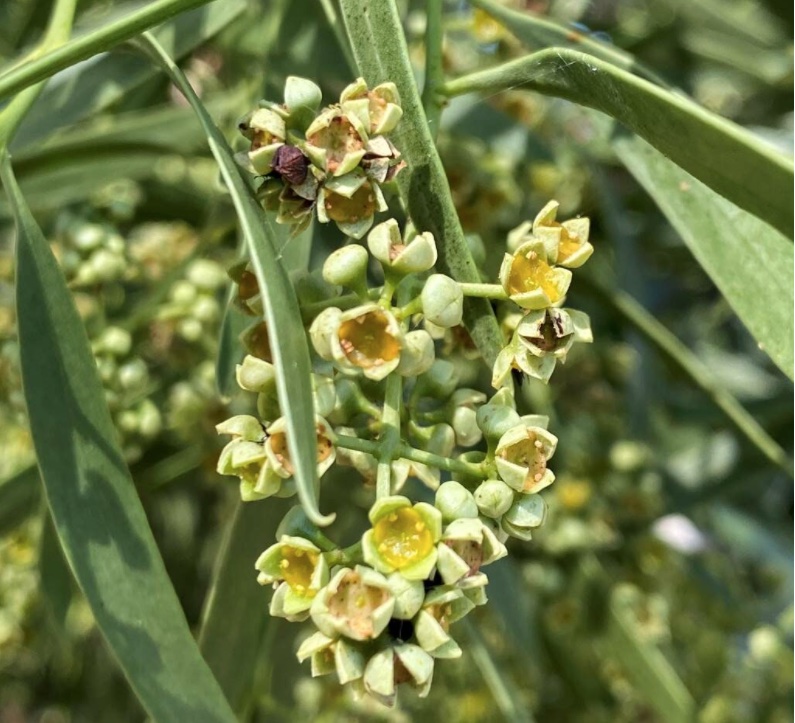 As a typical gardener, I’m always looking for something new to grow and not easily put off when something is difficult to grow. For years I’ve been trying to grow these elusive plants, ever since seeing them laden with fruit in outback South Australia. Travelling through the Flinders Ranges 30 years ago, every little roadhouse or café had some Quandong jam or pies for sale, and I got a real taste for them. I’ve tried to grow them many times from seeds unsuccessfully. Finding seedlings for sale is not easy, but when I have several times, they’ve always failed. I’d pretty much given up on them, when a friend who lives in the Mallee said he was ordering seedlings from a grower up there with an orchard, and he could get me some. The challenge was on again!

I enlisted a couple of young women working with me in Melbourne at the time and brought them to Cosgrove for a planting binge. I decided to interplant them with old man saltbush, hoping they would work as host plants. We planted about 20 quandongs, spreading mulch and protecting them with plastic tree guards, and dad helped me install a drip system to get them started. 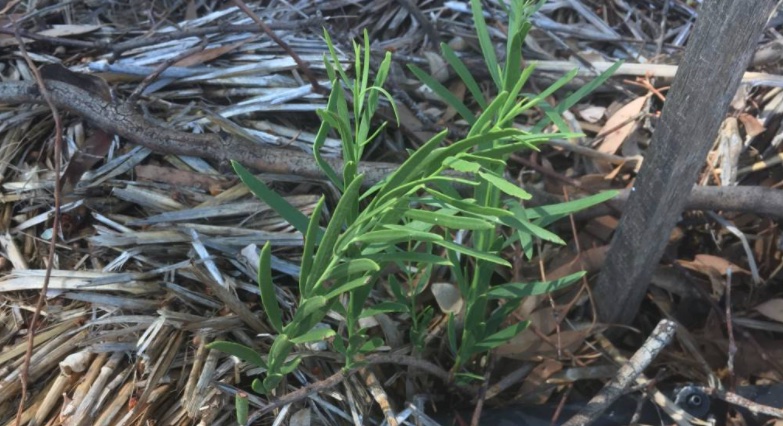 I decided to save three to try in my Melbourne garden again and planted them close together in a space between two established trees, an olive, and a carob, where I hoped they might get enough rain and sun to grow. Of these, the strongest and the weakest trees both failed, and I’ve been left with the middle one, which although is not growing as fast as the ones in Cosgrove, is still noticeably thriving, which is very gratifying.

After a year or so, most of the Quandongs at Cosgrove were going well, and I reasoned that as they were plants from the outback they wouldn’t need a lot of looking after, so I removed the tree guards. I was surprised when I then lost all but four plants. Not long afterwards, I came across a RIRDC (now Agrifutures) study, that explained what I had done wrong – Quandongs like to be protected for a couple of years after planting, not just one year like most native plants. Interestingly, the four that had survived were near a big old Yellowbox tree, so the canopy had probably protected them from wind and also excessive cold. Also, the study recommended planting the host plants a year or so before the quandongs, to establish their root systems first.

The recent rains have really boosted the Quandongs, and last year the strongest plant, now 2m high, managed a few flowers and this January it was covered in flowers, so fingers crossed I get at least a few fruits. I can taste them now…

Grow your own root vegies for winter

Spicy plants to add to your vegie patch